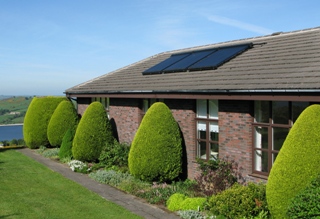 Last month the International Energy Agency (IEA) published the paper “Heating Without Global Warming. Market Development and Policy Considerations for Renewable Heat”. The paper looks at current renewable energy use for heat including solar panels for heating and at its future prospects and what it needs to develop. The study is an important document, it is the first publication focusing on the renewable heating sector for five years and it includes the three technologies bioenergy, solar panels and geothermal. Paolo Frankl, Head of the IEA’s Renewable Energy Division in Paris, France said; “We want to raise the attention for renewable heat technologies in the policy arena through analysing and making scenarios,” Frankl explained in an interview with solarthermalworld.org.
Source: IEA

The authors from the IEA, state in their recommendations that renewable heat including solar panels for heating water deserves greater attention. “Only about 40 countries worldwide have adopted renewable heat policies to date, compared to more than 100 that have policies for renewable electricity in place. The policy situation is very patchy, and neighbouring countries with similar resources have different approaches,” the executive summary reads. Solar thermal in particular is talked about by the IEA when they ask “What´s different about heat?” in the paper. They go on to name three differences:

Reduction of fossil fuel subsidies
Another notable policy recommendation is that: “The creation of a level playing field for renewable energy, through reduction of fossil fuel subsidies and/or by introduction of pricing mechanisms for CO2 emissions is crucial to promoting renewable energy use for heat.” However, the IEA authors also gave the industry surrounding solar panels itself some work by asking it to produce: “Improved data on heat and cooling production, general demand and renewable energy use for such purposes, as well as technology costs, would considerably improve the analyses of the sector and the formulation of cost-efficient policy measures.” These statements are a strong and important signal, particularly because the IEA has mostly focused on fossil and nuclear power to date and that its publications are important guidelines for politicians and administrators considering the policies concerning solar panels and other renewable energy technologies.

The chapter “Outlook on the future role of renewable heating and cooling” places solar panels – thermal technology with the highest growth rates at 14 % per year on average between 2011 and 2018. A related IEA report projects that global solar panels for heating capacity will almost triple from 235 GWth in 2011 to 635 GWth in 2018. China is where most of the growth will come.