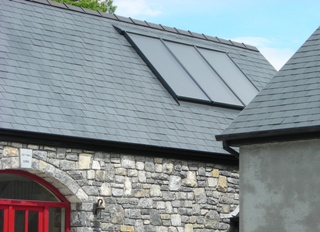 The domestic Renewable Heating Incentive (dRHI) for England, Wales and Scotland was launched on 9 April 2014. For solar panel thermal water heating, the dRHI will pay the end-user at a rate of 0.192 (GBP)/kWh for 7 years – that is €0.23 per kWh of solar thermal energy far in excess of any fossil fuel derived energy source.  The dRHI applies to biomass boilers & stoves, ground source & air to water heat pumps and solar thermal water heating.  This is a very progressive scheme where the incentive to install solar panels for water heating could be a very powerful instrument to influence the renewable energy market for domestic water heating something like this for Ireland would be most welcome.

The solar thermal equipment has to be fitted by a qualified installer certified under the Microgeneration Certification Scheme (MCS). He must follow the methods shown in the MIS 3001 document ‘Requirements for Contractors’ for solar thermal. This requires a solar thermal energy performance calculation to be performed and given to the client according to document MCS 024 ‘Solar Domestic Hot Water Energy Calculation’ which provides the ‘deemed’ basis for the total annual energy eligible for the dRHI tariff. The calculation is based on the older Appendix H of the Standard Assessment Procedure (SAP) 2012 which only calculates for simple system layouts using climate assumptions based on 21 UK regions.

No metering will be required on solar primary systems, but metering may be required on other technologies that solar domestic hot water is integrated with. The payments are related to the calculations made by the solar thermal installer prior to installation.

The MIS 3001 document also requires many fixing and weatherproofing components to have been tested to published standards so as to meet UK building regulations.

The solar thermal dRHI will not be available to systems that assist  space heating and applies only to domestic hot water. It is the only technology under the dRHI not eligible to support space heating.  Swimming pool heating is also not supported. Only liquid filled collectors are eligible and non that co-generate with electricity i.e. thermodynamic panels are not eligible for support under this scheme.  Eligible solar thermal systems are listed under MCS and typically have Solar Keymark. The applicable standards referred to for solar thermal systems are EN 12975-1:2006+A1:2010, EN 12975-2:2006, EN ISO 9806:2013, EN 12976-1:2006 and EN 12976-2:2006.

The dRHI scheme incorporating solar thermal panels has been generally welcomed but the costs of participation are becoming prohibitive with solar panel installers and solar panel manufacturers protesting at the increased requirements to be involved.

Martyn Bridges, of Worcester Bosch Group has said that “It’s tough for installers to get themselves eligible for MCS, Green Deal etc, but it is also expensive, complicated, time consuming  and frustrating for manufacturers getting solar products tested for compliance under MCS012. MCS now lists an extensive list of additional requirements over and above what is already a harmonised European standard”.  Patrick Davies of CoolSky has added that “in order for the Renewables and Solar Thermal Sector in the UK to thrive, the legislation needs to more openly accept alternative methods for installers / installation companies to show they are competent to undertake the installations.. An open, free and competitive market for the certification and accreditation of competent (solar panel) installers and installation companies is needed in the UK to encourage new installers into this sector and for the sector to grow”.